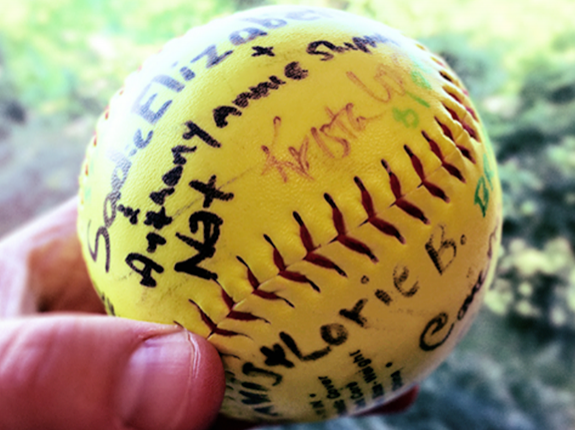 Brian Lord, a youth softball coach and board member for East Williamson Athletics (Franklin, TN), submitted this idea to share with other coaches and administrators throughout their season.

Coach Lord, who recently brought his softball team to a county championship victory, sees the "Parent Ball" (pictured above) as the real trophy for his team. As a kid, Brian Lord only remembers playing catch with his dad once. In his 30's, he bought his dad a ball and a glove, and they got to play catch not long before he passed away.

At that moment, Lord decided that if he ever became a coach, he'd be sure to create opportunities for parents and their children to spend time and create memories together through softball.

At the beginning of the season, Coach Lord has each of his players, in jersey number order, take home what he calls "the parent ball." The player takes the ball home to share in a game of toss with his/her parent, sibling, guardian or mentor and they each sign the ball before passing it along to the next player on the roster. This same activity can be done with older siblings, role models, guardians, or mentors, and can also be used for any sport.

The activity itself, though particularly impactful in helping reinforce a bond between parent and player, can also be utilized as an opportunity for the parent or guardian to ensure their child takes away lessons from sports that will help them be successful in life. Parents can use this time to reinforce resiliency after a tough loss or emphasize a growth mindset if the child is having a particularly difficult time mastering a skill.

Parents can download the article below to read how to use this time with the "Parent Ball" in their role as a Second-Goal Parent®.

How Parents Can Make A Coach's Job Easier With Empathy

Catanach, volleyball coach at the University of Tampa, instructs parents on coach and athlete interaction.

Focus On Life Lessons For A Lasting Effect

Lon Babby, NBA Senior Advisor for the Suns, sees how the life lessons he taught his son's youth team paid off.