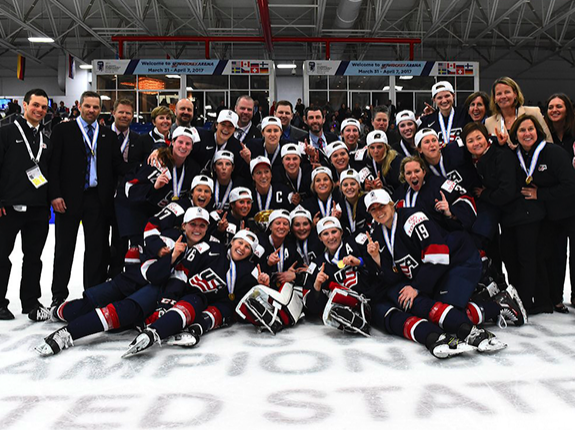 Dr. Colleen Hacker (@DrColleenHacker), a member of PCA's National Advisory Board, has served on the coaching staff for six Olympic Games in three different team sports (soccer, field hockey, and most recently ice hockey). Hacker, who has a Ph.D. and is a Professor of Sport & Exercise Psychology, has served as the U.S. Women's National Team’s (USA Ice Hockey) Mental Skills Coach since 2011.

According to Dr. Hacker, “The same principles and techniques that we cultivate to achieve excellence in the Olympic Games can be mastered and adopted by athletes and teams at any level and in any sport.”

In the document below, Hacker outlines five of those principles:

1. You don’t have to finish first to be a winner: We challenge our athletes to carry themselves as Champions regardless of the score or outcome both in practice and in competition. Athletes can exhibit integrity and positive character in all aspects of sport and in life. They don’t depend on winning to maintain confidence, a passion for playing and practicing, joy in being with their teammates and a commitment to becoming a better version of themselves as athletes, as teammates and as people.

2. Control the Controllables: Each sport is comprised of four pillars: the technical components (the skills unique to that sport), the tactical components (team strategy, offense and defensive sets, etc.), the physiological components (strength, endurance, speed, flexibility, anaerobic power to name a few), and the psychological components (mental toughness, imagery, focus, confidence, action plans, etc.). Just like Olympians, athletes at every level should be actively practicing and targeting improvements in each of the four pillars on a daily basis.

Former Olympian: Failure Is Not Failure If You Learn From It

Get It Right The First Time? It's A Fluke.

Mistakes are the lifeblood of learning and coaches should aim for a mastery approach to learning new skills.

Failing One Time Doesn't Make You A Failure

Coaching for Mastery: The ELM Tree Of Mastery Toolkit For Coaches

These six steps help coaches introduce a mastery approach, instead of focusing just on the scoreboard.

Brenda Villa shares her Olympic experience and the road to becoming the most decorated water polo player ever.

Mental Toughness Means The Ability To Focus On The Next Play

Jack Clark on what mental toughness means and the importance it plays on a successful team.