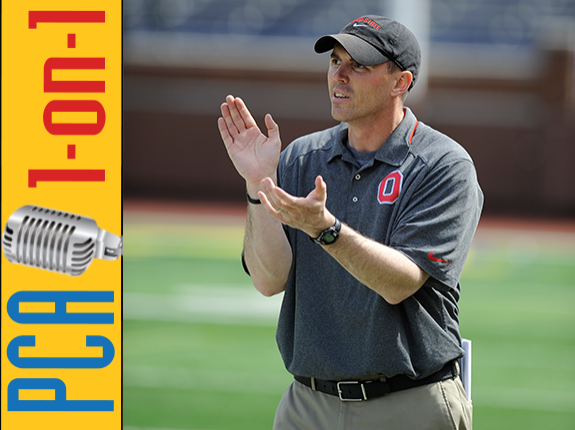 This 1-on-1 interview features Ohio State University Men's Lacrosse Coach Nick Myers (@MyersJMZ), who completed his seventh season as head coach for the Buckeyes in 2015. He took over the program in 2008, after three seasons as the team's top assistant. He has led the Buckeyes to the first postseason title in program history, two Creator's Trophy titles, a share of a league regular-season title, and spots in the NCAA quarterfinals twice (2013 and 2015).

Rich Pruszynski (PCA's Senior Manager, Partner Support and a Wisconsin state champion lacrosse coach with Marquette University High School), talks to Meyers are how he got involved in lacrosse and his coaching techniques. A strength of this podcast is its focus on team-building and team-bonding, including specific tactics Myers and his players use. For example, they take retreats to West Virginia for whitewater rafting, "...campfires, no phones, no Twitter for a couple days…just brotherhood."

Myers also delves into specifics on his team's Leadership Council, comprising players from all four classes (freshman through senior) and its bi-weekly off-season conference calls. He also employs a Big Brother-Little Brother approach to having players mentor each other.

Finally, in considering how he conveys expectations and helps his players reach higher standards than many of them thought they could achieve, he explains, "Elite people want to be challenged, and they enjoy feedback."

The 21-Day Gratitude Challenge For Athletes, Coaches, Parents, And Leaders

A grateful spirit is what allows us to Embrace The Suck, says Rockies Pitching Coach Steve Foster.

What Kids Can Really Learn From Elite Pro Athletes

Best-selling author Paul Tough describes how coaches and parents can be both warm and demanding.

Creating A Challenging Culture That Kids Want To Be Apart Of

Christian Lavers talks about creating an environment that helps players accomplish their goals.

Steve Kryger on how important it is for coaches to build trust with their players.

To Help Players Off The Court, Know Them As People And Stay Available

Award-winning coach reflects on how she can impact her players as people.