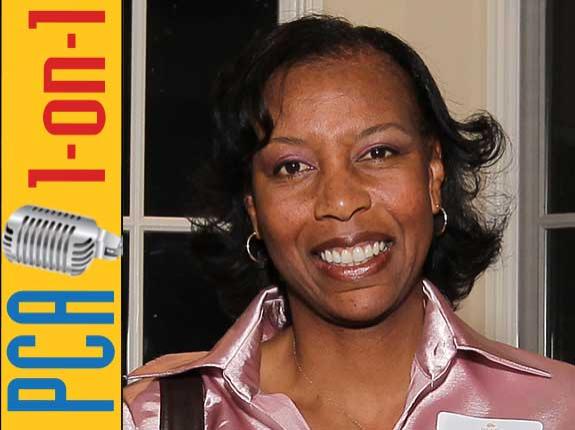 This 1-on-1 interview features Kim Oden, a PCA National Advisory Board Member and Olympic Volleyball Bronze Medalist. Oden graduated from Stanford University with a degree in public policy. After graduation Kim joined the U.S. Women's National Volleyball team and captained the squad in both the 1988 and 1992 Summer Olympics Kim finished her Olympic career by bringing home a bronze medal in the 1992 Olympics. As a coach at Saint Francis High School in Mountain View, California, Oden won PCA’s Double-Goal Coach® Award.

Ruben Nieves, PCA Director of Training, talks to Oden on such topics as performance under pressure, specialization and teamwork. Oden is a great example of an athlete who took up her sport at an age older than most of her peers, yet still ascended to the highest level possible. She strives to promote sports as fun, and thinks coaches often over-emphasize specialization at an age when kids aren’t developmentally ready to compete. She also talks about her supportive parents, who never intervened between Oden and any of her coaches. Here's where you'll find Oden talking about featured topics:

Steve Kerr on playing for Phil jackson and other top coaches, plus his relationship with his father.

Marcelo shares his experience being coached by his father and being a coach of his sons team.

Under Pressure To Perform? Alternatives To Drugs And Alcohol

Terry Shapiro speaks about the natural ways an athlete can cope with pressure.

Christian Lavers says that pressure makes the game exciting and fun, but with that comes mistakes.