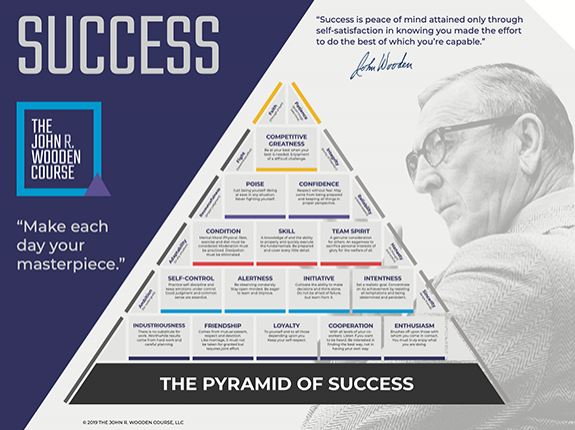 John Wooden, former basketball player and legendary basketball coach, was known for his success with the UCLA Bruins. Nicknamed the “Wizard of Westwood,” he won 10 NCAA national championships within 12 years, 7 of which were consecutive, and was named national coach of the year 6 times. During his time at UCLA, Wooden also set a men’s basketball record of 88 consecutive wins. Wooden managed to make an impact as a coach, leader, and teacher to not only his players, but to people all over the country.

This Pyramid of Success, courtesy of The John R. Wooden Course is a visual and verbal representation of John Wooden's concept of what it takes to succeed. The Pyramid represents 15 fundamental values and 10 supporting attributes that he believes are, “prerequisites for a leader and an organization whose goal is to perform at the highest level of which they are capable.” Wooden used this Pyramid as a foundation for his players, his staff, and himself throughout his career. Every chosen value has a specific role and place within the Pyramid, and when executed, can bring success to individuals and organizations alike.

Great coaches can be transformational. Learn more about our online training that thousands of coaches have taken: CLICK HERE.

A Dual-Focused Philosophy For Success

Chris Rotelli, one of the most accomplished lacrosse players of all time, focuses on life lessons and winning.

Super-Bowl-Champion-turned-youth-sports-coach on transfering skills and knowledge from sports to life lessons.

Coaches can use this chart to focus on what your players are doing well, to help Fill Emotional Tanks.

Reduce The Pressure Of Sports By Celebrating Success