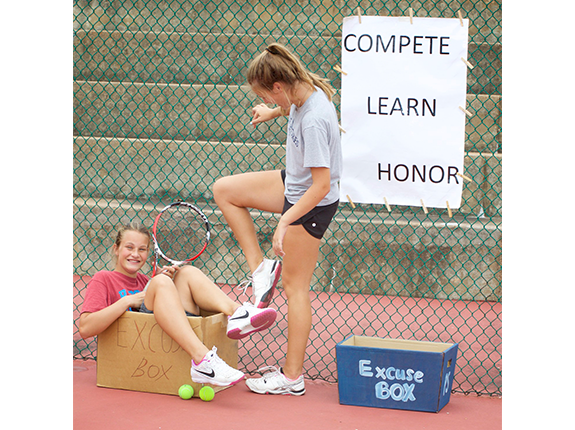 Peter C. Scales, Ph.D., is internationally known as one of the world’s foremost authorities on positive youth development (www.drpeterscales.com), having conducted studies on youth well-being in more than 30 countries. Coach Pete is also a U.S. Professional Tennis Association-certified tennis teaching pro who serves as the head JV tennis coach for boys and girls at Parkway South High School in Manchester, Missouri, and is a PCA-certified Double-Goal Coach.

In this excerpt from his book Mental and Emotional Training for Tennis: Compete-Learn-Honor (available on Amazon and CoachesChoice.com), Scales writes about the Excuse Box.

If players are in the habit of making excuses for how they're playing, this usually means blaming everything and everybody but themselves. Winners are those who take personal responsibility for their game, win or lose.

The Excuse Box is a great way of reducing excuse-making. I got so frustrated one season at all the excuses the players were inventing for how they were playing that I took a little box and wrote "Excuse Box" on it, and placed it outside the fence around the courts. The players were told to drop all their excuses in the Excuse Box.

Either literally write them on a piece of paper and drop them in, or just imagine and pretend doing that, because the court should be an oasis from excuses, and a place where players take responsibility for what happens. And if you really want to go back down into the muck and mire of the excuses after practice, by all means take them out of the box and suffer some more after practice, if you must. But don't bring them onto the court.

The Excuse Box won't eliminate all excuse making by athletes, but you might be surprised by how much it will cut down on them!

Parents Can't Make Kids Passionate About Sports, It Comes From The Kid

David Portugal emphasizes why kids should be passionate about the sport as opposed to the parents.

Cut From The Team? Didn't Make The Grade? Keep Showing Up

Graham Betchart talks about the importance of persistence when trying to accomplish something.

Tommy Amaker On The Role Of A Player's Character In Recruiting

In this video, coaches, parents and athletes learn how a player's character affects recruiting.

Positive Use Of Social Media

Words to the wise about youth athletes' use of social media: be careful, and keep it positive!